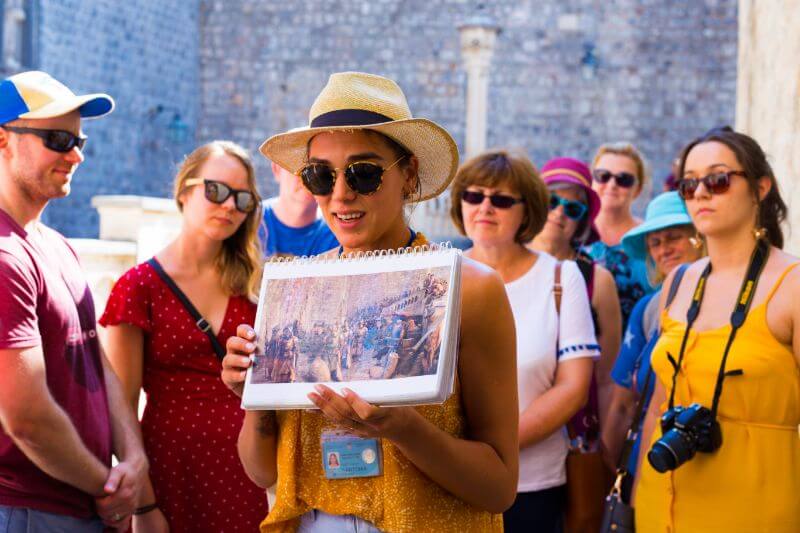 Meet our guides before taking the tour of Dubrovnik! They are local, they love the city and are excited to introduce their favorite corners of Dubrovnik to you. Our guide team is made up of people who like traveling and have travel experience, so they have a passion for sharing the compelling narrative of their hometown.

Our guide Antonia Jakić is no different. She is a seasoned guide with overwhelmingly positive feedback on her energetic tour presentation style and cheerful character. We asked her a set of questions on how it is to be a guide in Dubrovnik.

This summer will be my 5th season working as a tour guide.

History and architecture. To find so many fascinating, brave stories about freedom and love for independence in such a preserved, medieval little town makes you wonder to dig more to find out the story behind it.

I love the story about the ambassadors of a medieval republic called “Ragusa”, whose main job was to deliver an annual tribute to the Ottoman Empire in return for our freedom. Sometimes those men would be kept in prison for months, tortured and asked for more money than arranged, but the main rule was to never give more. Even if you have to beg and cry. So they’ve done that as well.


The story has it that one ambassador was crying and begging so much that the Sultan at the time couldn’t listen to his cry anymore and decided to let him go back home after months spent in dungeon. This story proves that what today we would call cowardy, at the time was indicative of loyalty and bravery – that made that man a hero of his people.

First of all, the Game of Thrones tour is something completely different from what was offered to the tourists before amongst walking tours. It is incredibly fun, informative and unique. It goes a bit deeper into the process of making movies, difficulties of filming in places like the Old Town is and shows everyday risks and adventures that the HBO filming crew experienced in Dubrovnik.

Today I am, a big one. But when they first started filming, just like many others who live in Dubrovnik, I had no idea who they are and how big this TV show is going to become. I saw if when season 3 came out, and since then I’ve seen it several times from beginning to end. And I could do it many more times!

Unfortunately, never. It is still on my to-do list. Maybe I’m waiting for R.R.Martin to write the last one. Because nothing is over yet if you ask him.

I must say “The Red Wedding” scene. I loved how he turned weddings into misfortunate events because let’s be honest, no one expects so much death on one’s happiest day. And yet, R.R.Martin managed to surprise us. Thank God things like that don’t happen in real life.

My favorite location is the botanical garden called “Arboretum” in Trsteno, one of the oldest botanical gardens in Europe dating from the 15th century. It was used to film “King’s Landing Gardens” in the show. It is incredibly peaceful and different from the Old Town. Sometimes when I’m there, I wish someone could just serve me some lemon cake like lady Olena did to Sansa and make my day!

I didn’t have so many crazy requests from fans, but I had once a girl who wanted to recreate the Walk of Shame, only not being Cersei but Septa Unella. She had a grey scarf over her head, with a serious face repeating: “Shame! Shame! “. That was really cool and different.

I think the Walk of Shame part is fans’ favorite place to see. It must be that the idea of filming a naked lady walking down the stairs as a punishment intrigues and excites everyone who comes to our tour. Sometimes when I tell them we’re going there, their faces light up like Cersei is actually waiting for them to start walking down. I love that part of the tour, so much laughter, and fun!

I never participated in the filming of the show nor I have been an extra, but I did see the crew and actors many times in the city. It always seemed very relaxed when they filmed, maybe because most people had no idea about the popularity of the show during the filming of earlier seasons. They did have to take more care because of UNESCO’s protection of Dubrovnik and very old architecture within the walls. Stairs were their biggest nightmare since they are everywhere in the Old Town.

Exactly like you said it. The real truth is that many people don’t really come just for the show, there are many other reasons why they visit Dubrovnik. Game of Thrones is just that “last touch” that makes them decide easier whether to come here or go somewhere else. There will always be more cruise ship guests coming to Dubrovnik than real fans of the show, but the fact that almost everyone knows about it something we can’t deny.

I think that those people sometimes forget that with time, some things will slow down, become less loud. History, on the other side, is always present in Dubrovnik. Even on my Game of Thrones tour, it has its moments, which I love sharing with the fans. The heritage of our town is not forgotten or has lost its shine, it is also enormously respected by people who come on the tour about the show, but they see and learn so much more about the city itself.

If we talk about Game of Thrones tour, then Game of Thrones should be the main topic. History is mentioned because without it, the walls and the Old Town, the show would’ve never been filmed here. One goes with another and it is always important to mention it. 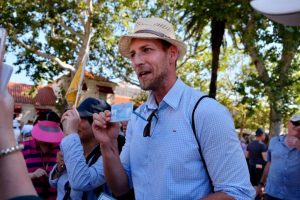 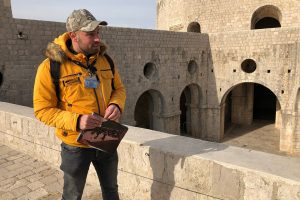